Some compounds used in skin care

some of the ingredients used in skin care products.... 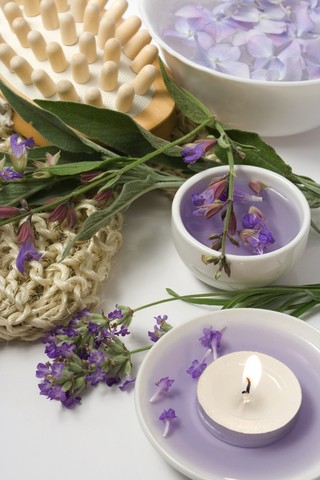 Aloe Vera: A wild plant of the lily family used for years as a healing agent and beauty aid. Aloe vera juice appears to be effective in relieving the pain and inflammation of sunburn. The aloe vera gel contains vitamins B1, B2, and B6, calcium, potassium, chlorine, enzymes, and other ingredients not yet identified.

Antioxidants: Antioxidants in skin care include the antioxidant vitamins E and C, and beta-carotene. They work by destroying free radicals (oxygen molecules that break down collagen, which causes wrinkles and sagging). More available in the page Vitamins in Skin Care.

Beeswax:A substance made by bees to build the walls of their cells. Used as an emulsifier to soften and protect the skin. Emulsifiers keep the skin care product from separating.

Benzoic Acid: A preservative used in skin care products that is generally non-irritating, though it may cause a reaction in people who are sensitive to similar chemicals.

Beta-Carotene: Research has suggested that it may be possible to sheild the body's immune system from harmful UVA rays-and reduce the risk of skin cancer- by suplementing the diet with beta-carotene. Too much, however, can cause a yellowing of the skin called Carotenemia.

Butyl Stearate: One of the most common stearic acids used in cosmetics, such as nail polish removers, lipsticks, and cleansing creams.

Camphor: A fragrant compound from an Asian Evergreen tree that is used in skin care products because it feels soothing to the skin. Camphor will not affect the outcome of an acne breakout, but it is helpful for chapped skin. If inhaled for a long time, camphor can induce a severe headache.

Castor Oil: A vegetable oil derived from the castor bean. Used in cosmetics as an emollient, it forms a hard film when dry. It is often used in lipsticks, but because of it's unpleasant smell, it is not often found in other cosmetics. Rarely associated with skin irritation or allergic reactions.

Chamomile: An herb that scientists have found to have real value for hair and skin. A mild mixture of chamomile leaves produces an oily substance that is soothing to the skin, used most often by adding it to the bath. A solution of concentrated chamomile left on the hair for a few hours will lighten it several shades.

Cinnamate: A sunscreen that blocks both UVB, and less well, UVA sun rays. recognized safe and effective by the FDA. However, cinnimate can cause a contact and photocontact dermatitis.

Clay: A mineral used in face and body powder, face masks and foundations that is particularly helpful for normal and oily skins. It does not cause allergic reactions.

Cocoa Butter: An oil extracted from roasted cocoa nut seeds used to soften and lubricate the skin, often used instead of wax or harder creams. It has the same emollient properties as any other vegetable oil, and it has not been associated with allergic reactions.

Coconut Oil: A white saturated fat derived from coconuts that melts at body temperature and is used to smooth and lubricate the skin. Because it produces an excellent lather, it is often used in soap.

Cucumber: As a freah vegetable or in extracts, the naturally acidic cucumber contains vitamin C and Chlorophyll; slices of cucumber can be helpful in soothing tired, puffy eyes.

Dihydroxyacetone (DHA): The FDA approved active ingredient in topical self-tanning products. This is a harmless skin dye that reacts with an amino acid in the skin or sweat to produce a temporary tan that flakes off as you shed skin. The higher the concentration, the more orange the tan will appear. Does not offer any skin protection against the sun.

Elastin: In cosmetic products, elastin cannot make your skin tighter. Used as a moisturiser it is thought to form a film on skin that helps lock in moisture.

Estrogen: Used in some facial creams designed for dry and lined skin and permitted in creams by the FDA only in low dosages, estrogen does not alter the growth of skin cells, but does enable the skin to retain water. Medical-grade estrogen is allowed to contain higher levels of estrogen, and some experts believe that estrogen at this dosage level can improve skin tone on a limited basis.

Ginseng: The dried root of the Panax schinseng plant that is reported to contain hormones and vitamins. Research has not found any evidence that ginseng can improve the appearance of the skin.

Glutamic Acid: An amino acid included in some expensive cosmetics that purport to improve the appearance of the skin. All amino acids combine to form proteins under certain chemical conditions, but because more than two different amino acids are needed to form useful proteins, simply including glutamic acid in a skin cream will not provide much benefit. Further, it is not possible to rebuild the proteins of your skin with amino acids, and they are not absorbed when applied to the skin.

Glycerin: A clear liquid made by combining water and fat that is used in many cosmetics and toiletries because it improves the consistency of creams and lotions and helps them retain moisture. Glycerin, however, tends to draw water out of the skin and can make skin drier.

Humectant: Substance that preserves the moisture or water content of the skin. Most dry skin lacks moisture rather than oil, and therefore humectants and moisturizers are needed instead of creams or oils. The most effective humectants are alpha hydroxy acids, particularly lactic acid, which, when applied to the skin, draws water from the dermis into the epidermis.

Hydroquinone: A skin bleaching agent that can reduce the intensity of pigmentation due to freckles, melasma, and senile lentigines. When applied to the skin over a period of several months, the skin temporarily becomes somewhat lighter. For continued and increased effectiveness it must be used for a longer term. Sun exposure should be avoided because it reverses the effect of hydroquinone by increasing skin pigmentation. Occasionally, at higher concentrations, persons with a darker skin type will experience increased pigmentation. There is mild skin irritation and the possibility of an allergic reaction.

Lanolin: A mixture of a yellow, oily substance obtained from sheep's wool and purified water that is used as an emollient to treat dry skin. Lanolin is a common ingredient of bath oils and hand creams. It is also used to treat mild dermatitis. Occasionally, lanolin can irritate the skin, or in some people, an allergic reaction develops.

Lemon: A fruit that contains both citric acid and vitamin C, lemon is good at cutting grease and is one of the few natural ingredients that can retain its properties after chemical extraction. For best results, cosmetics should contain concentrated lemon juice and not just the essence for a lemony fragrance. Fresh-squeezed and diluted lemon juice is an excellent rinse for oily hair.

Mineral Oil: A clear, odourless oil derived from petroleum that is widely used in cosmetics because it is inexpensive and rarely causes allergic reactions. It can, however, induce acne lesions.

Monobenzone: A permanent de-pigmentation agent that causes permanent skin bleaching. It is used only in severe cases of vitiligo to remove residual areas of normal pigmentation.

Nucleic Acids: The building blocks of protein, these specific chemicals act on the nucleus of cells. They cannot stimulate growth when applied to the skin's surface or to the hair. However, like all proteins, nucleic acids in cosmetics can form a film on the skin or hair shaft to help retain moisture.

Oatmeal: A colloid-containing grain that soothes the skin and can be very helpful for itchy skin conditions. Oatmeal is often included in face masks and soaps because it absorbs oil from the skin's surface and lessens redness of irritating acne-prone skin. Non-irritating oatmeal soaps are a good choice for people with sensitive skin.

PABA: The abbreviation for the active ingredient in sunscreen-Para-Aminobenzoic Acid-which is very effective in blocking UVB rays of the sun. Some people are allergic to PABA and its esters, especially if they are allergic to the "-caine" group of anesthetics (lidocaine, benzocaine) or to certain hair dyes. Allergic reactions to PABA resemble sunburn.

Panthenol: A vitamin B complex that can add strength and body to hair by filling in cracks on the shaft, thereby firming up the fiber.

Propylene Glycol: A substance used to improve the "spreadability" of a product that can worsen acne.

Royal Jelly: A substance that is secreted from the digestive system of worker bees that is fed to male bees and workers for a few days after they are born. Because the queen bee eats royal jelly throughout her life, royal jelly became associated with health and long life. In humans, however, studies have shown that royal jelly does not prevent ageing.

Seaweed: A plant whose gelatin-like properties make up the main ingredient in peel-off masks that allow the skin to retain moisture. Seaweed is also used in face creams and lotion to help provide body to the products.

Silica: A mineral included in face and body powders and paste-type masks. Silica is soothing and forms a moisture retaining film on the skin.

Sodium Lauryl Sulphate:A detergent cleanser and emulsifier in creams and lotions that may cause allergic reactions in some people.

Sulphur: An important mineral component of vitamin B1 and of several essential amino acids. Sulphur is particularly necessary for the body's production of collagen, which helps to form connective tissue. Sulphur is also a component of keratin, the chief ingredient in hair, skin, and nails. By controlling bacteria and exfoliating the skin, sulphur is a popular acne treatment. Sulphur is thought to dissolve the top layer of dry, dead cells and slow down oil-gland activity. The highest concentration of sulphur in over-the-counter medication is 10 percent. Sulphur may cause a mild sensitivity and allergic reactions, and can irritate the eyes. Discontinue use if irritation occurs.

Witch Hazel: An extract of the leaves and bark of the Hamamelis virginnia plant used as an effective astringent. It can dry out spots, reduce oil on the skin, and soothe bruises and sprains. Puffy eyes can be refreshed with refrigerated witch hazel-soaked pads.

Zinc: For many years, zinc has been used as an astringent, an antiseptic and a skin protectant. Some dermatologists recommend zinc to their patients for it's anti-inflammatory effect, theorising that zinc releases vitamin A which may normalise cells. Zinc oxide is also an effective sunblock.

Zinc Oxide: An ingredient in many skin preparations that has a mild astringent action and soothing effect. It can be used to treat painful, itchy or moist skin conditions, and will block the ultraviolet rays of the sun. An inert ingredient, it is often used to thicken lotions and creams